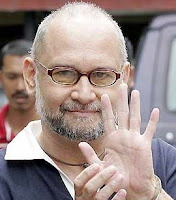 Sometimes we need a storm to get people’s attention. Maybe now the police will do what I have been asking them to do these last three years: that is, investigate my statutory declaration and ascertain the truth behind what Lt Kol Azmi Zainal Abidin alleged.


The Umno websites and blogs call me a liar. They say I have signed a statutory declaration falsely accusing Rosmah Mansor and the husband and wife Lt Kols (Aziz Buyong and Norhayati Hassan) as being at the scene of the Altantuya murder the night she was murdered and blown up with C4.


The Malaysian government says the same thing and they arrested me and charged me for criminal defamation.


The mainstream media says the same thing: that I alleged Rosmah Mansor and Lt Kols Aziz Buyong and Norhayati Hassan were at the scene of the Altantuya murder the night she was murdered.


The online media also says the same thing; even sites like Malayskini, The Malaysian Insider and so on.


For three years I have written article after article explaining the statutory declaration that I signed in June 2008. I have made video recordings on the same matter, which are in Youtube, plus I spoke at ceramahs about this issue all over the place.


But until today my explanation has been ignored. They still insist that the story is: I alleged that Rosmah and the two Lt Kols were at the scene of Altantuya’s murder the night she was murdered.


The judge ignored me and recorded a plea of not guilty and demanded that I face trial.


Not contented with that, they further detained me without trial under the Internal Security Act. During my ten-day interrogation, the senior Special Branch officer, Datuk Zambri, asked me about the statutory declaration that I signed.


I told him the whole story and even named names. I named names because these people had said that if anything happens to me I have their permission to mention their names. In fact, if I were to be put on trial, they were prepared to come forward to testify, they said.


And that was what I told the Special Branch. However, after I had told them this, my 60-day detention was cut short and the next day, the tenth day of my detention, I was whisked off to Kamunting under a two-year detention order. It was as if they wanted to bury my story by burying me in Kamunting.


I have, in fact, written about this matter before so it is not a new story. Some readers have even commented that I appear to be repeating myself and it is getting very tiring to read the same old story. Nevertheless, how many times I may repeat myself they still do not seem to understand what I say. They still insist that I alleged that Rosmah Mansor and the husband and wife Lt Kols were at the scene of the Alatantuya murder the night she was murdered and blown up with C4.


When TV3 asked me if I would consent to an interview and that the interview would focus on my statutory declaration, I agreed. I have only once before appeared on national TV. This was the live Blog program on TV1. This time, however, it would be recorded.


I realise the danger of recorded interviews as opposed to live shows like the TV1 Blog program. But I know I can handle even the toughest interviews. After all, what I would be saying is going to be the truth anyway. So why worry? Certainly they are going to spin it but then that is a risk I would have to take.


Most seem to not understand that I did not make any allegation against Rosmah or the two Lt Kols. That was not what my statutory declaration said. I made an allegation against a third Lt Kol. And this third Lt Kol is Lt Kol Azmi Zainal Abidin, the number two in the special branch of the military intelligence.


I told TV3 that what I am about to say is not something new. I have written and spoken about this many times before. I have even made my statement to the police during my ISA detention. And this statement was recorded by the police.


But this statement was never made public. What I told the police has been hidden from public view. What I said has been ignored totally. Instead, the story of my allegation against Rosmah and the husband and wife Lt Kols is what is repeated again and again by all and sundry.


I really don’t know how much of my more than one hour interview is going to be aired on TV -- probably less than 10% of it. Nevertheless, now that a storm has been created, it allows me to bring back the focus to the story behind that statutory declaration.


Nik Azmi Nik Daud -- or Bul to the MCKK Old Boys (short for Bulat) -- phoned me one day in June 2008 and asked to meet. We met for tea at La Bordega in Telawi, Bangsar. I brought my wife along and Bul brought someone whom he never introduced to me and who sat the entire time as quiet as a church mouse without once opening his mouth even to yawn, cough or sneeze.


Bul then related that Lt Kol Azmi Zainal Abidin, the number two in the special branch of the military intelligence, has a confidential report that proves that Rosmah, Lt Kol Aziz Buyong, and his wife, Lt Kol Norhayati Hassan, were present at the scene of Altantuya’s murder at the time she was murdered. Bul told me to expose this.


I told him to let me think about it first. My wife, however, disagreed. She felt that the story is too far fetched and that Bul is not a reliable source. We can only do that if they show us the confidential report.


I decided to do nothing.


A few days later, Bul called me a second time and asked to meet again. This time we met for Sunday lunch at the Selangor Club in Dataran Merdeka.


Bul asked me whether I was going to expose the story and I told him I would not. I told Bul I would surely be arrested and charged if I do what he suggests. He assured me that if that happens, and he wants that to happen for the plan to succeed (which means I am the bait), then the military intelligence report would surface.


My wife was against it. She thought it was a very risky exercise. Can we be assured that the confidential report would surface if the shit hits the fan? Bul swore that they would cover me. “We will make sure you do not go to jail,” Bul said.


I relented and said I would do it. My wife gave me a disgusted look.


I would write the article that same night I told him.


I hesitated. An article is one thing but a statutory declaration is very dangerous. This is playing hardball.


I then called up John Pang, who, just like Bul, worked for Tengku Razaleigh Hamzah and I told him what Bul had asked me to do. I told John that I have my reservations about Bul but if Tengku Razaleigh confirms this story then I am inclined to believe it.


I was still not sure, though. So I called up Din Merican and asked him to check with Anwar Ibrahim about the background of this Lt Kol Azmi. Din called back and said that Anwar knows him very well -- he also often goes to see Anwar -- and that he is very reliable.


In other words, it could be true or it may not. But only one person can confirm this. And this person would be the source of the information.


The police, however, went for me, not for the source of the information. Even after I revealed the name of the source they still did not want to do anything. It was as if I was the source rather than the reporter.


When all hell broke loose I contacted Bul and met up with him. I asked him for a copy of the confidential military intelligence report. Bul said that they no longer have it. The entire file has been shredded, Bul said.


Surely they have a back up copy, I said.


The whole objective of this exercise was to block Najib Tun Razak from taking over as Prime Minister. If Abdullah Ahmad Badawi can be forced to resign, and if Najib can be blocked from taking over, then Tengku Razaleigh could become the next prime minister.


The purpose of this meeting was to explore how it can be engineered so that Tengku Razaleigh can take over as prime minister. Bul, of course, was the ‘main speaker’ with all the ideas on how this can be achieved.


Today, Bul declares that he is a strong Najib supporter and that he has always supported Najib from way back. Suddenly he is no longer the man who was scheming on how to block Najib from taking over so that his boss, Tengku Razaleigh, can be the new prime minister.


Bul, who promised me that he will make sure I will never go to jail and that the military intelligence report would surface the instant the police come for me, today, tells me that the report no longer exists.


The question is, did the report even exist in the first place? And Din Merican, who spoke to Anwar and who assured me that Lt Kol Azmi is very reliable and John Pang, who spoke to Tengku Razaleigh on the same matter and gave that same assurance, have washed their hands of this whole matter.


I can understand Din leaving PKR to go back to the other side. He did tell everyone he is disillusioned with the party and he is not the first or the last. John Pang, however, is now with CIMB Jakarta and we all know who owns CIMB.


Suddenly, everyone who was part of the conspiracy to block Najib from taking over is a strong Najib supporter from way back in time.


Yes, TV3 gave me that opportunity to tell the story I have always told but no one appears to be listening. Suddenly everyone is listening, thanks to TV3.


Sometimes we need a storm to get people’s attention. Maybe now the police will do what I have been asking them to do these last three years: that is, investigate my statutory declaration and ascertain the truth behind what Lt Kol Azmi Zainal Abidin alleged.


Now you know what my TV3 interview was all about.